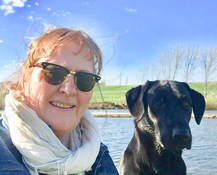 My first introduction to dogs was as a baby, my parents had their first dog, a yellow Labrador  Retriever      Honey, who was with them six months before I was born. Honey was mine and my sisters constant
companion until we left to emigrate to Australia when I was ten. Honey stayed in the UK with my
grandparents so on arrival in Australia we purchased our second Labrador, also called Honey, followed
by  Cindy and then my parents changed allegiance to Golden Retrievers, Tess, another Honey and Chai
who was then joined by Ebony, a black Labrador.
After purchasing my first home in 1995, my sister and her husband gave me a Flat Coated Retriever Pax,    Ch Lainston St Charity ET NRD, who became the first dog that lived solely with me. With Pax I entered the world of dog competitions firstly in conformation, obedience and eventually retrieving trials. Pax obtained her Show title followed by her Endurance Test title. It was after this and because of my involvement with the Gundog Club of South Australia I was introduced to Retrieving Trials. It was soon very apparent that this was to be Pax’s greatest love, whilst she tolerated going into the show ring as soon as we went into a paddock at a retrieving trial this was where she really wanted to be.
In May 1999, Pax and I entered our first retrieving trial at Mulgundawa, South Australia. Unfortunately it was not to be a successful venture as Pax failed to pick up a bird and with the consent of the judge I withdrew her from competition. The judge was incredibly encouraging of both of us, so much so that eighteen months later I married him, Noel Eltringham.
Marrying Noel meant a move to Victoria and with his help and encouragement Pax and I went on to achieve her Novice Retrieving Dog (NRD) title. With Noel, I have since trained and trialled to my yellow Labrador Ski, Rt Ch Terraway Avalanche. With Ski I successfully completed my first State Retrieving Trial Championship which was followed by further championships and completing the first day of a National Retrieving Trial Championship. I have since trialled a further three Labrador Retrievers, Teal, Reveirter Teal Duck NRD, ORA, Kai, Reveirter Clan Dalziel RRD and most recently I have trialled “Duke” RT Ch Willowyse the Duke with who Noel and I share the handling. At various times I have also handled “Moose” Gr RT Ch Reveirter Swan Hill to wins in All Age Stakes.
We, Noel and I, strongly believe in giving back to the activities that we are involved in so in 2007 I applied and was accepted into the Retrieving Trial Judges Scheme and became a Novice judge in December 2007. I continued with my progression under the Retrieving Judges Training Scheme and was accredited to a Championship Level Retrieving Trial Judge in September 2011. Since commencing my judging career I have been fortunate to have been invited to judge in all states of Australia with the exception of the Northern Territory. In 2012 I was invited to judge the Dogs Victoria Retrieving Trial Championship. I have since judged two further State Retrieving Trial Championships in South Australia in 2013 and 2014.
I would like to thank the RAFT Committee of Dogs Victoria for the invitation to judge the 2018 National Retrieving Trial Championship and look forward to adjudicating the dogs over the three days of the National Championship.
Kate Eltringham

My background in retrieving trials goes back over 35 years. In 1978 I trialled a Weimaraner for a period of
approximately 12 months. After this initial exposure my next contact with retrieving trials was approximately 14
years later when I gained possession of my first Labrador Retriever in 1992.
My first Labrador Retriever was ‘Tess’ (Rt Ch Firefield Yankee Belle CM). ‘Tess’ was such a brilliant natural retriever
she was able to overcome most of my short comings in the sport to get the results she ultimately obtained. ‘Tess’
ended up winning over 20 All Age trials, two State Championships and a second in a National Championship as well as
​  finishing in two other Nationals. Up until her eventual passing at the age of 17 years she was still her own boss as far as she concerned. ‘Tess’ was accepted onto the ANKC Field and Retrieving Trial Hall of Fame in 2009.

My second Labrador was ‘Tess’’ son ‘Tike’” (Gr Rt Ch Reveirter Jet Kite). ‘Tike’, although a totally different dog and very soft was equally successful in retrieving trials. ‘Tike’ was still running competitively in retrieving trials at the age of close to 12 years and gained 360 championship points. ‘Tike’ won four State Championships, placed in five National Championships and placed in a total of 25 of the 38 Retrieving Trial Championships in which he competed. ‘Tike’ also gained entry to the ANKC Field and Retrieving Trial Hall of Fame in 2010

Trialling has given me many new friendships including meeting my wife Kate (who I proceeded to put out of a trial before her dog had retrieved a bird on the first occasion she had trialled). In addition to working in partnership with my dogs it is the friendship and camaraderie at trials that has been a major attraction to me.

It is an honour to be entrusted with the appointment of judging the 2018 National Retrieving Trial Championship with my wife Kate. Kate and I will do our best to set a fair and equitable trial within the Rules for Retrieving Trials and hopefully return the faith of those that entrusted us to judge the event. I would hope to ensure at this trial that all competing dogs are given an equal chance in the competition. By maintaining a level playing field I would hope the training and ability of dogs can be fairly assessed. I intend to set a trial using the available conditions and terrain that will test the key attributes I believe are essential in a well trained retriever at championship standard.